This may be the coolest place I’ve ever been, alone or otherwise.

What does one think about when hiking alone? I was finding out. 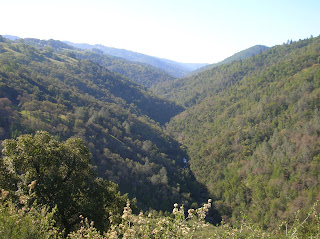 It was an overnighter in Henry Coe State Park, Northern California’s largest state park -- maybe its most rugged, too. One thing, perhaps the thing, to know about Henry Coe is this: What is up must go down, and what is down must go up. A long way up.

The whole massive park is a series of rocky ridgelines peaking evenly around 2,100 feet, cut with lush, narrow valleys harboring shallow streams and, along their banks, gorgeous native grasses. Their hillsides are oak savannahs – or, at the highest elevations on the sunniest slopes, a sort of high-desert chaparral dotted with stubby, burgundy bushes. I don’t know their names, but I know their faces.

From above, Henry Coe must resemble some deranged hedge maze. From the top of any given ridgeline, the peaks and valleys extend as far as the eye can see in every direction – unless, if you’re above 2,300 feet or so, and the air is clear, to the east you get a view of the Central Valley and the snow-capped Sierra Nevadas. But there’s enough scenery close at hand to dismiss those mountains. Leave them to the crowds.

I wonder what Jos is doing right now.

My wife was back home in Oakland, alone, but not by choice. I was perched atop a rock outcropping, looking west toward the setting sun, eating a dinner that consisted of a cookies-and-cream-flavored Clif Bar and the rest of the water in my one-liter bottle. I wasn’t exactly comfortable: my seat left much to be desired ergonomically; my body was chilled by a stiff, cool breeze meeting me head-on; my legs were sore from twelve miles on the trail. But I was all alone, utterly alone, enjoying the solitude and the view I’d earned, and I felt good. Yeah: It was one of the coolest places I’d ever been. 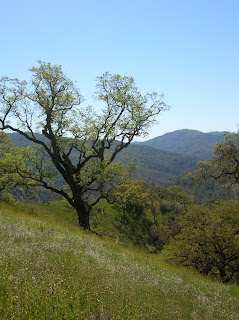 Even with a light pack, maybe 25 pounds, getting here wasn’t easy.

Whoever built this trail must’ve been a masochist, daring hikers behind him to gain this ridge in the most direct way possible. Asshole.

That was a few miles back. After hiking 1.2 miles and 1,200 vertical feet on the Willow Ridge Trail and summiting its eponymous spine, I’d continued another couple miles east along the ridge-top, then dropped down into another valley, walked along a creek at the bottom, and climbed back up the other side. A half-mile north on that ridge led me here, to my rocky seat. Twenty feet away, my campsite was semi-shielded from the wind by the outcropping on which I now rested.

This is it! I’d said to myself when I found the spot.

This is the most badass thing I’ve ever done! Not true. I’d hiked alone in Henry Coe before. I’d swam across a lake, drunk, at midnight. Etc. But this was cool. Backpacking solo holds the capacity for such exaggerated revelations. There’s no one else around to check your emotions, so they’re all yours.

My foot hurts. I wonder if I have a blister. I think it’s just raw.

All this isn’t to say that hiking alone must be some ferociously profound experience. It is also mundane. I was hiking in sandals – Tevas – for the first time. I loved it. My feet felt fast and light. But my right foot also burned a bit. I thought about it for many miles, almost as much as I thought about the hills and the trees and the views.

Mmm. That was good. (After dinner.)

It’s windy as balls up here! (Setting up camp.)

My first tick! (A little guy scoping out my left thigh. I flicked him away. Always ticks at Henry Coe.)

I wonder if Adam would want to do this hike. Or Jos. Or Wally. 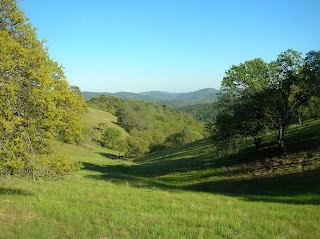 While the solitude is deeply satisfying, there is an urge to share the experience. To have someone vet my exhilaration, my serenity, my triumph: Yes, Nate, this is cool. You are right.

Hiking alone, I think a lot about solitude. About what it is. About what it means. About what it means to me. By bedtime, I hadn’t seen anyone in eight or nine hours. That’s not much. But it feels deep. That’s proof enough that solitude is only natural. It’s something we all need, something we crave, whether we know it or not. Backpacking alone, we get a piece of this. A taste. Even if our time alone is mundane; even if it is boring, or painful, or lonely. For me, it’s wonderful, even for one measly day.

I used to think my favorite thing about backpacking was self-reliance. But that wears off. Now I think it’s getting away from any signs of people. Solitude.

This is what flashed through my mind earlier in the day. Also:

Jos is gonna be pissed at me. Is this smart?
…
Here goes nothing.

When I diverted from my original route.

Where is the damn trail?

When my diversion turned out to be an overgrown, non-maintained trail.

This is fucking beautiful.

When that overgrown, non-maintained trail descended into a new valley I’d never seen before. The sun, now low in the sky, cast filtered yellow light on tall green grasses growing from edge to edge of the small valley, through the narrow stream making its way lackadaisically down the middle, to the brown and grey rocks in the creek bed reflecting refracted light back up at me and speaking their own round wisdom.

You can’t just walk into solitude. You can’t seek it out. It must find you. The rocks may have said this to me, or the oaks. 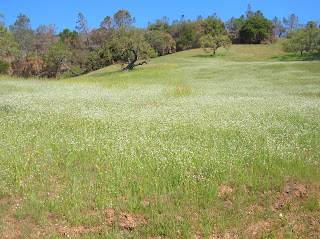 It wasn’t selfish to be here. I was sure of that. I was proud, happy to be alone. But I couldn’t resist that nagging urge to broadcast the minutiae of my experience. To prove I’d been here. To document what I saw.

My thoughts kept coming, unregulated. They were mostly mundane. But they were profound, too – because mundane thoughts become profound upon their exposure to a place like this, as blood turns red when it meets oxygen.

There is so much water! It’s like twice what it was last time.

I am definitely taking a dip tomorrow.

Now this is wilderness. 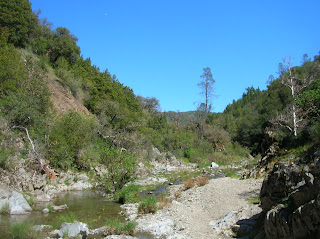 Recording my internal monologue was a strange process. I wondered if the knowledge that whatever passed through my head would make it onto paper in any way affected what passed through my head. I tried not to let it. I wanted to learn what one thinks about when hiking alone. What thoughts run through the mind? What do they stand for?

I should check for ticks again before I go to bed.

Thank God for the trekking poles. I would not be doing this without them.

I talked to myself. I kept myself apprised of the situation. I monitored my progress. I cheered myself on. I assessed my physical condition. I described the scenery. I conversed with the world.

At night, a windy night, I had a dream.

My tent had blown over and was resting on its side in the middle of the trail. I was still inside. Instead of the tent floor, I was laying on one wall. Suddenly, I became aware of someone unzipping the other side of the tent. A face peered down through the open door. Someone had come upon my overturned tent in the middle of the night and was checking to see if I was alright. I felt a rush of panic.

I awoke to find myself lying on the tent floor and staring up at a moonlit sky, gusts of wind still shaking the tent. I was alone, invigorated by momentary fear. I had communed with something deeper. This sort of dream does not happen at home, where there is no danger. There is no real danger here, either, but the mind is freer to roam.

The next day, I hiked back out. I ascended ridges and descended into valleys.

This motherfucker is steep. 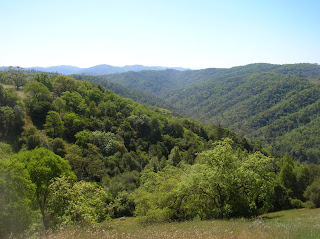 At one point, a few miles from camp, a lizard appeared on the path. I decided to talk to it.

Did you lose it? I was making sure.

He cocked his head.

Are you a horned lizard?

Well, have a good day.

I took a step forward and he scurried into the underbrush.

Later, I came across a rattlesnake. It happened like this:

OH SHIT!!!! I actually said this out loud. A fully grown rattlesnake occupied most of the single-track trail three feet ahead of me. I had startled it as it had startled me. It coiled up, hissed, prepared to strike. We peered at each other for three or four minutes. It wouldn’t back down, still coiled, still poised to strike. I knew I was beaten. I turned around and retreated fifty or so paces. I got out my camera. I waited a minute. I headed back. The snake was gone.

When I get to the next trail, I’m going to have some food and then change into shorts.

I think I’ll treat myself to a burger at Carl’s Jr. on the way home.

I did.
Labels: hiking/running parks

Council for Advancement and Support of Education, District VII (Western US) - 2nd place Best Articles of the Year for "The New Grid," 2013

North American Agricultural Journalists (US + Canada) - 2nd place Features for "How Safe Is Your Soil?", 2012